Located in Northern Arizona’s high desert, nestled under the southwestern rim of the Colorado Plateau, the City of Sedona rests like a gem among red sandstone rocks.

It seems like all the world knows the city of Sedona, situated at the base of spectacular Oak Creek Canyon, is a unique and magical place everyone should experience. Distinguished by massive red-rock formations and the contrasting riparian zones of Oak Creek, Sedona sits in the middle of 1.8 million acres of unspoiled Coconino National Forest, divided between Yavapai and Coconino Counties. This treasured community in among the spectacular peaks and spires of red rock country is considered by many to be the most beautiful place on Earth. 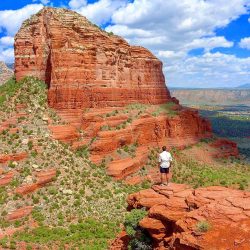 The City of Sedona, one of America’s premier tourism, recreation, retirement and art centers, was founded in 1902 and later incorporated in 1988. Historically, it began as a rural ranching community, with apple orchards and corn fields dotting the landscape. But once its unsurpassed natural beauty came to national attention through the motion picture industry, the sleepy little farming town was transformed into a world-famous travel destination visited by nearly 3 million tourists each year.

Today, you will see the famous red rocks of Sedona as a popular back drop for numerous TV commercials, including major brands like Volvo, which are filmed along our designated scenic highways and in the unsettled areas surrounding the city.

Sedona’s population hovers around 10,000 residents within the city limits.  The elevation is about 4,500 feet, depending on which rock you stand on (some of the rock formations surrounding the city reach up to a mile-high elevation). The primary industry and economic engine is tourism. Art, music and wellness play major roles in Sedona life.

Sedona enjoys four mild seasons, with average high/low temperatures of 95/75 in the summer and 55/35 in the winter.  Spring and Autumn are Sedona’s busiest time of year, with numerous festivals and annual events. Another unique feature of Arizona life is the fact that the state does NOT observe Daylight Saving Time. We neither spring ahead nor fall back!

Sedona Arizona is a year-round wonderland of outdoor activity, and a place of magic. People have come to Sedona for decades to explore natural beauty, personal enrichment, spirituality, adventure, western & native culture and sometimes, themselves. Anyone who has been here will tell you… Sedona will change you.

You’re invited to visit Sedona, the most beautiful place on Earth.