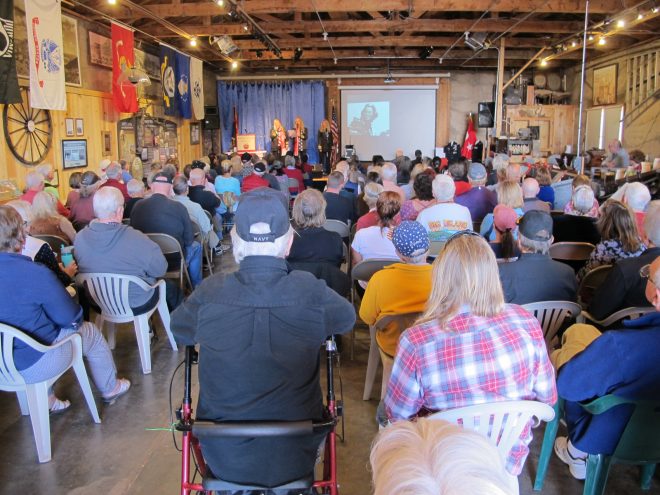 According to a study by Wall Street 24/7, approximately 500,00 Arizonans, or 9% of the state’s population, are military veterans, ranking our state 11th in the nation. With military facilities scattered throughout Arizona, it’s no surprise our state is highly concentrated with military personnel from around the country.

America’s military has contributed crucial moments and colorful anecdotes to Arizona’s modern history. For example, the expansion of Luke Air Force Base as a World War 2 training site was a significant factor in the explosive growth of post-war Phoenix. When flight training stopped at Tucson’s Davis Monthan in 1945, the base housed German POWs for more than a year. Fort Huachuca was the home of the “Buffalo Soldiers” of the 10th Cavalry Regiment from 1913 to 1933 and served as an alternative landing site for the space shuttle, though NASA never utilized it. Camp Verde, Fort Apache, Fort Grant and Fort McDowell are among the many places whose names reflect the history of Arizona military posts. Today, we are in the top third of states contributing first-time military recruits.

Sedona honors our veterans each year with a ceremony co-hosted by the City and the Sedona Heritage Museum. This year featured a tribute to the 100th anniversary of the Tomb of the Unknown Soldier that included a ceremonial wreath-laying by Mayor Sandy Moriarty and the playing of “Taps” by Prescott’s Brad Moors, courtesy of the Marine Corps League. Brad is a 23-year retired Master Sergeant from the United States Army Band “Pershing’s Own” in Washington DC. He served as a bugler at The Tomb of the Unknowns and Arlington Cemetery.

Sedona’s two remaining World War 2 veterans, Fred Piper and Herbert “Boots” Claunt, were also present. Fred is the last World War 2 vet to cite Sedona as his hometown when enlisting. Boots is now 102 and served in Burma during the war.

Women are prominent in today’s military, and we are fortunate to have distinguished women veterans all around us. For example, Emerson Theatre Collaborative Executive Director Camilla Ross is a 16-year veteran of the National Guard, US Navy and Navy Reserve. Camilla came to Sedona in 2015 as a dynamic voice championing the performing arts for youth and under-represented communities. Be sure to catch ETC’s holiday show “Every Christmas Story Ever Told (and then some),” a lighthearted look at the season’s icons through the centuries.

Retired Chief Warrant Officer 4 Michele Inglis Zahner believes, “If you want to get to know a town, volunteer.” She has been active with Friends of the Forest, Sedona Food Bank, the Heritage Museum, the City Park & Rec Ranger program and even as a Salvation Army Bell ringer. Michele served 23 years in US Army intelligence, posted in the Middle East and Africa. She came to Sedona in 2008 with her husband, retired US Army Lt. General Richard Zahner.

Our veterans are also entrepreneurial, many operating Sedona-area businesses. We are helping raise their profile with plans for a special web page linking to veteran-owned companies. Check out the new page at SedonaAreaVeterans.com. If you are a veteran business operator – chamber member or not – or know of a veteran-owned business, please let us know by emailing Partner Engagement Manager Erin Bruce at ebruce@sedoanchamber.com.

As Thanksgiving nears and we count our blessings, let’s remember to be thankful for the service of our veterans in Sedona and around the world. We are indeed the home of the free – because of the brave.