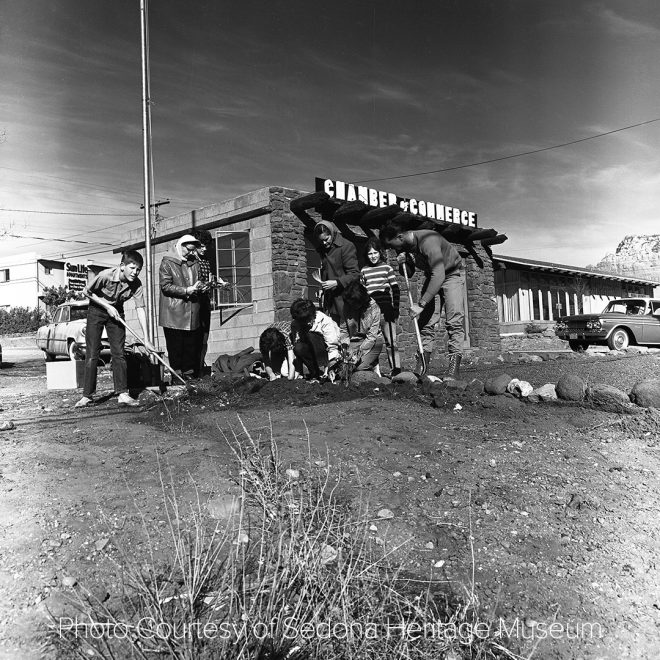 Here is an easy Sedona treasure hunt. Go to our newly refurbished Visitor Center at Forest Road and SR 89A and try to spot an unassuming brass plaque embedded in the front wall. It’s in plain sight, but some people may not notice it right away. The plaque commemorates the Lions Club of Sedona purchasing the building and gifting it to the Chamber in 1969. However, there is more to the story.

The Chamber’s headquarters was built in the 1950s on land leased from the U.S. Forest Service. In the 1960s, a Phoenix company acquired the property, and the Chamber suddenly had to move out. Somehow, a very friendly purchase price of just $536 was negotiated, but even that was too much for the 1960s-era Chamber budget. Lions to the rescue! They turned it over to the Chamber after buying it with their own $536 — with one caveat. A plaque commemorating their generosity would be prominently displayed — a promise that is honored to this day.

There are many chapters to the Chamber’s Sedona story, which began in 1948, decades before Sedona had a city government. Back then, so much community business was accomplished at Chamber headquarters. One newspaper story called it “Sedona’s unofficial City Hall.”

Preserving Sedona’s beauty has always been a primary concern. The Chamber took the lead in finding solutions and launched a campaign to eliminate the plethora of unsightly billboards cluttering Sedona’s views. An award was given to businesses who took a “No Billboards” pledge. Soon, the Lions, Rotary, Business and Professionals Women’s Club, and the Sedona Arts Center joined in the campaign to remove billboards. In January 1964, Stretch and Elsie Maiden, owners of the Silver Spruce Restaurant and Turtle Cocktail Lounge, became the first to dismantle their own billboards. Others soon followed. When the Southwest Military Academy of California bought the Beaver Creek Ranch, the new owners enthusiastically tore down billboard advertising at the ranch, and their students joined Verde Valley School in helping demolish others. The campaign was a victory for Sedona’s environment, quality of life and visitor experience.

At that time, trash was on everyone’s mind. The Chamber’s “Fight Litter Bandits” campaign featured bumper stickers that read “Vigilante.” It was meant to imply Sedonans were “vigilant” about litter bugs. People got the message and trash was dramatically reduced. Our beautification campaigns received national publicity as visitors from around the country took note. In 1968, Lady Bird Johnson’s “Keep America Beautiful” drive honored Sedona as we finished in the top ten of the ‘National Cleanest Town’ contest. Sedonan Dan Kingman III accepted the trophy from Mrs. Johnson herself.

In the 1960s, Sedona attracted celebrities. The Chamber made Lucille Ball an honorary Chamber member when the “I Love Lucy” star came to town in 1961 with her business manager, scouting for investment opportunities. Not everyone was pleased with Sedona’s growing popularity. A letter to the Arizona Republic in February of 1968 stated that Oak Creek Canyon was “too congested to enjoy.” Also, that same year, pollution of Oak Creek was in the news.

As you can see, the Chamber has been assisting the community for decades, leading the search for solutions and galvanizing Sedonans to get results.  A historical perspective can help build unity and patience as we work together to advance solutions to tourism management, economic balance and environmental stewardship. We often think of that plaque at the Visitor Center, which reminds us of our roots, our history of success and the positive spirit that is needed to help achieve our goals.